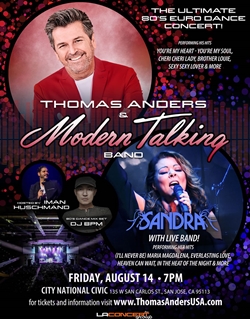 3 hours of high energy music, featuring The Gentleman Of Music – Thomas Anders (original magnetic voice of Modern Talking) accompanied by the Modern Talking Band! Sandra accompanied by her own band to perform her ultimate hits of 80s such as Maria Magdalena, In the Heat of the Night, Everlasting Love & more…

Opening entertainment by DJ BPM Spinning the best of 80’s hits as soon as the doors open. Host of event- Iman Huschmand! So put your dancing shoes on and come on over for this historic night.